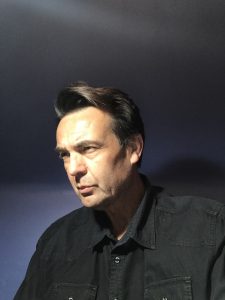 Miroslav Spasov, composer, conductor, and researcher, writes instrumental and interactive electroacoustic music.  He was born in Skopje (N. Macedonia) in 1964. After graduating from the University of St.Cyril and Methodius in Skopje in 1992 (composition, conducting and music theory) he worked as music producer and conductor for the Macedonian Radio and Television (MRT) until 1997. He received both his MMus (David Eagle, 1999) and PhD (Allan Bell, 2002) in Composition from the University of Calgary, where he was appointed as a Teaching Fellow in composition, theory, and musicianship in 2002. Between 2003 and 2005 he taught composition, orchestration, 20th century music analysis, and lead the chamber music ensemble in the Department of Music at Eastern Mediterranean University, Famagusta (N Cyprus). He joined Keele University in 2005 and since 2014 he has been a Professor of Composition and Creative Music Technology in the School of Humanities.

Spasov has received several grants for creative work from The Canada Council for The Arts and Alberta Arts Council. Among other awards, he has received the 3rd Prize at the ‘Concours for New Music Compositions’ Ministry of Culture of Republic of Macedonia in 2015 for his Danzacalle for orchestra. His Metaanthropos/Evolutio 1 for flute and electronics, won the 1st prize in the International Computer Music Competition ‘Pierre Schaeffer’ (1999), and his orchestra piece à gauche, à droite, en haut was awarded an honourable mention by the ‘10e Concours International de Composition Musicale de Besancon’, France in 2000.